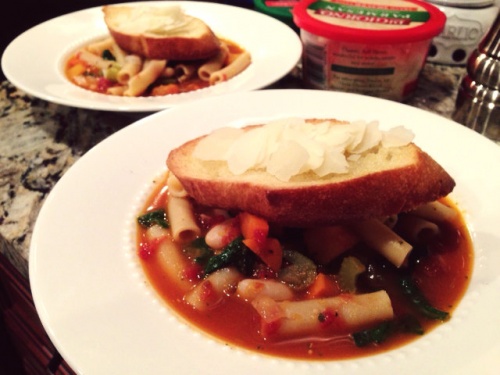 I saw this recipe across a crowded room and it was love at first sight. We had finally made it across town to try out this new barbecue place. We were chowing down on some seriously delicious pulled pork sandwiches when Ina Garten caught my eye on the television. After trying to figure out why in the world they would be playing the Food Network at a restaurant, I found myself caught in that very trap– drooling over food on tv while subsequently stuffing my stomach full of another delicious food (because America!). I scribbled down the name of the recipe and ‘barefoot contessa’ so I could look the recipe up later. I think it was the allure of the giant pot, full to the brim with chunks of veggies. And the most brilliant and delicious little tip I learned while watching Ina work her magic—-I saw her RUB a garlic clove across the tops of the toasted french bread. The heck with garlic salt. It half grated, half melted itself into what I would soon learn is the most delicious  topping for a hot soup on a cold day. You know, those cold cold, snowy Florida days.

winter minestrone
from the Barefoot Contessa