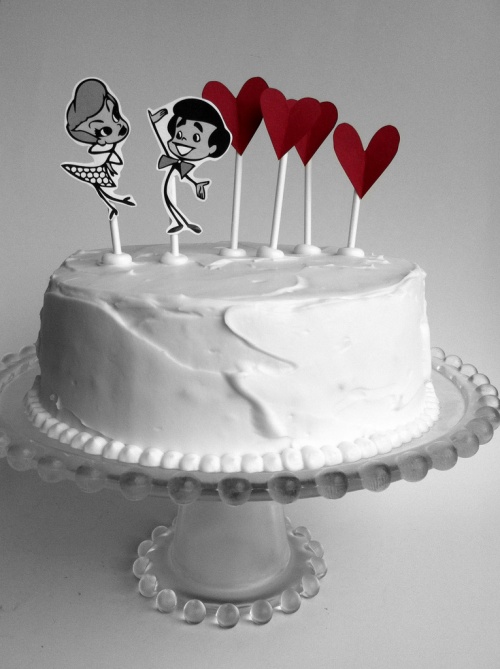 I was raised on ‘I Love Lucy’. I remember rummaging through row upon row of VHS tapes, reading the backs to see which one held the 3 episodes I desperately needed to watch right away. Lucy getting into mischief, Ricky finding out and furiously shouting at Lucy, Lucy doing her classic diagonally slanted moan as she realizes she’s in trouble…..and the classic kiss-and-makeup ending.  At the hub at this Lucy frenzy is my mother, who’s recent 50th birthday party prompted the purchasing of the entire I Love Lucy series on DVD, which takes up the space of a cereal box. That box of VHS tapes is still in my mom’s garage in case nostalgia kicks in and we have to watch it the good old fashioned way, the same way this cake was a nostalgic nod to so many years spent cuddled up on the couch, talking and laughing with Lucy. And what other way to celebrate my mom’s love for Lucy, the famous carrot top, than with a classic carrot cake. I searched for a cake that would cut clean and not crumble, something with a bright flavor (thank you orange juice and golden raisins) and some depth to it (ginger steps up to the plate!). And I’ve had this icing recipe on the shelf just waiting for a reason to try it out—-it pairs great with the cake and has a light, creamy texture that is less sugary and heavy than traditional cream cheese icing. So next time you crave a classic carrot cake, give this recipe a go. It’s a classic amped up a notch, both in presentation and flavor.