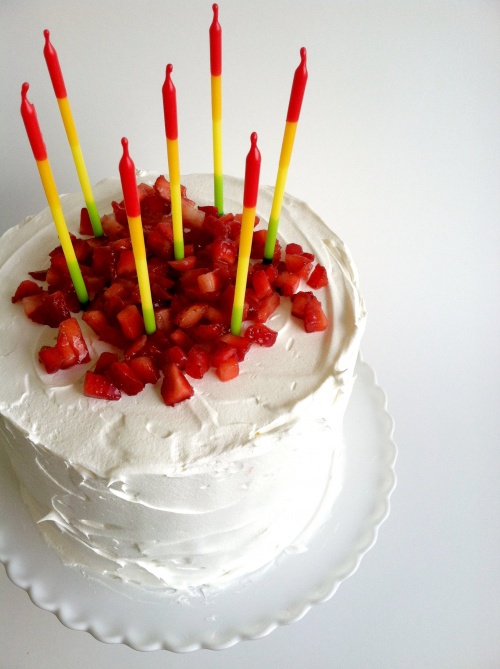 This was my first attempt at a real, tall layer cake. I have made a few 2 layer cakes in the past, but normally its cupcakes or cake pops or cookies….and this was fun! There is something very satisfying about carefully constructing a tower of confections. Leveling each cake, spreading layer after layer of icing evenly, stacking one upon another until you think it may fall…and the best part by far is slicing into it and revealing the flavors inside that you can’t see. This cake is excellent for beginners as I am going to give you the easy bake oven version, and those of you who choose to may gourmet it up with made-from-scratch cake and homemade whipped cream. This is technically 2 cakes in 1, and each slice of cake must be cut thin or else you will have honkin’ big pieces. But luckily this cake is incredibly light and fresh. My coworkers were sure the pieces were too big, but it eats easy because its not covered in heavy icing. If you aren’t a pro cake baker but want to impress your friends or make someone feel special on their birthday, try out this cake. It’s delicious!

strawberry tall cake
from i am baker

*I suggest 2 small things of whipped cream instead of 1 large one because they take less time to thaw out and end up with a better texture because of it. In the grocery store they are normally pretty frozen and I made the mistake of first buying a large one and in my frustration, attempting to apply it in its frozen form. It then melted and slid off. I tried whipping it back up and it liquified. Trust me so you don’t do what I did.