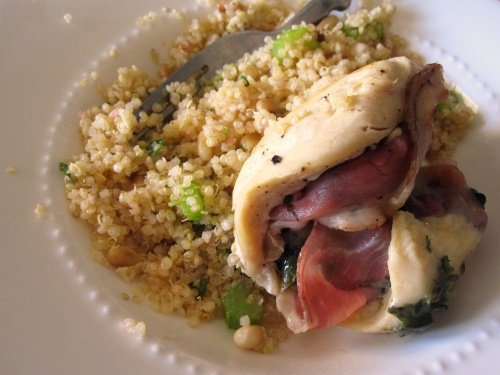 Finally. I have been meaning to post this recipe for a LONG time. It’s one of the best chicken recipes I’ve got. Sometimes I notice I will do anything to avoid a “plain old chicken breast recipe”. Lots of recipes are for chicken in this sauce or rolled in that breading, and I feel like a lot of them end up tasting the same—good because its chicken covered in cheesy or crunchy or whatever it is, but nothing spectacular. THIS is spectacular. Truly. Full of flavor and complexity. Juicy, to say the least. I’ve never had another chicken like it. We love it with a side of quinoa for a flavor-packed, nutritious meal (the recipe is on the blog too!).

chicken saltimbocca
from giada, on the food network