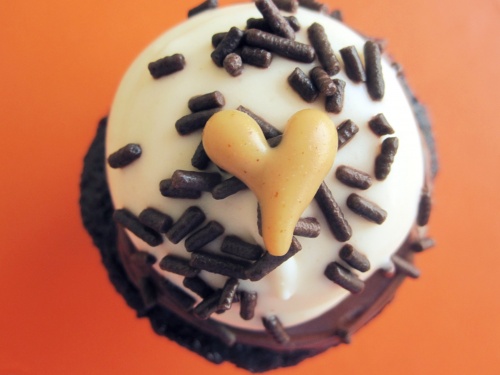 The sole reason for these cupcakes lies behind my love of peanut butter pie. I wanted some the other day when a crazy thought hit me—can’t I use it as icing?? (I know, I’m wild!) You could spread that creamy, fluffy goodness on a turkey sandwich and I’d be a happy camper, so why not cupcakes? And determined as I was to come up with some incredibly unique pairing for a cupcake flavor, type in “peanut butter and—-” into google and chocolate chocolate chocolate it is. There were ideas for apple or banana cupcakes topped with peanut butter icing, but overwhelmingly peanut butter pairs with chocolate to top the dessert charts. And I’ll be darned if I’m not going to give the people what they want. I went with the delicious dark cocoa cupcake from a previous post, spread with a layer of nutella, and topped with a dollop of whipped peanut butter pie filling. And it was crazy—I had an overwhelming amount of people telling me (or telling my husband to tell me or texting me) to say that they were the best cupcakes they ever had. It threw me for a loop, but I guess you can’t deny the delicious combination of peanut butter and chocolate. And a layer of nutella between the two never hurts.

double chocolate chip cupcakes
from the ‘oh so cocoa’ post

After making the cupcakes and allowing to cool, spread each cupcake with a layer of nutella.

**note, this is a peanut butter pie recipe (with some extra powdered sugar to thicken) and makes a lot. Next time I would only use one tub of the whipped topping to reduce the mass and would probably result in a less runny icing.