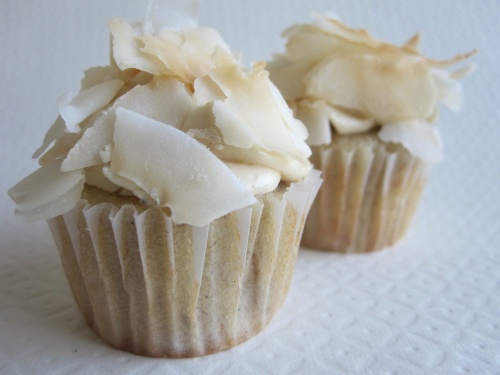 These came about by beautiful accident. I have been waiting and waiting for an excuse to make brown sugar buttercream. And not because I sneak the occasional spoonful of brown sugar for a pick me up (yeah, the big spoon)… But being that it’s not the crunchy leaf, cool breeze time of year when sweet potatoes, pumpkins, and pretty much anything served with a dash of spice finds its way onto our tables (and into our bellies), I kept deciding and re-deciding what it was that would be more sweat-out-of-your-clothes season appropriate. So that left me with apple or banana. And I ran across so many maple icing recipes out there on the world wide web that I couldn’t make apple cupcakes with anything else.  So banana it was! And then I set out to figure out some way to make  sure they weren’t banana muffins or banana bread. This is more of a vanilla bean cupcake which happens to have lumps of banana in it for one reason or another, topped with my crossbred version of brown sugar icing which happens to have cream cheese in it for one reason or another, topped with toasted coconut curls for one reason or another (>cough< it’s pretty and white and makes my house smell good). And after all this, the recipe was a hit. My toughest critics ooh-ed and ahh-ed and “wow! Can I get the recipe”-ed me. But for me the best part is it qualifies as breakfast. Bananas. It’s fruit ; )

brown sugar cream cheese icing
my own concontion, a compilation of many