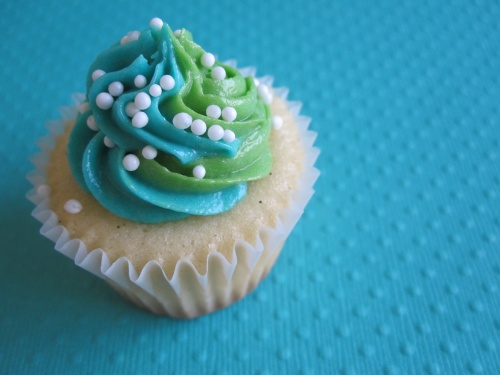 In these cupcake crazed times, more and more outrageous and unique flavors have made their way onto our tables. The last thing you’ll see these days is a plain old vanilla cupcake. A classic, this recipe amps up the flavor with real vanilla bean and an unmatched smooth, fluffy texture. I enjoyed splitting my first vanilla bean and scraping out the hundreds of little black beans–if ever you were able to say “made from scratch” this would be it. But don’t worry, its a pretty simple recipe and makes the most beautiful consistency of batter (I wouldn’t know about the batter flavor or anything since you’re not supposed to eat it or whatever but I bet it’s really stinkin’ awesome…or something). I also tried the two-toned icing technique for the first time, and will include whatever helpful hints I can offer if you would like to try it out. Enjoy!

*this buttercream is quick, simple, and versatile. It comes out nice and thick for great piping on cupcakes, and if you need it thicker for more detailed piping, add more powdered sugar (so as you can guess, this icing can get SWEET quick). Substitute lemon juice or another extract in place of the vanilla extract for different flavors. For an Irish cream buttercream, the only liquid you need is 2 tbs Bailey’s to replace the water and extract.