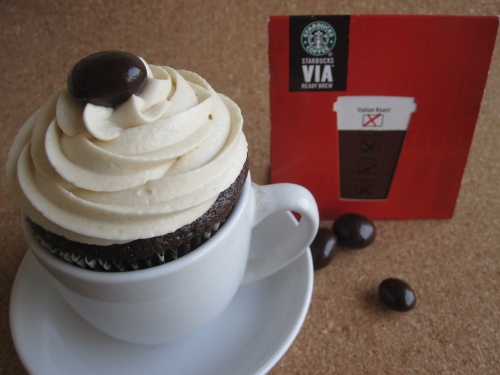 My husband works with a group of men who have graciously taken on the part time job of taste-testers and sweet-eaters. They also love their coffee, so when I got a request for a chocolate coffee cupcake combo via a cut out magazine picture of one that got passed from hand to hand until it reached me, I wanted to do it right. I had Starbucks Via Italian roast (a bold flavor) I had been keeping around for such an occasion as I always see reviews for coffee cupcakes followed by comments about how the coffee taste could have been stronger. This recipe has coffee in both the cupcake and the icing, and I opted for dark chocolate covered espresso beans to top them off which we found if you ate first–which almost everyone does because how can you not–left a lingering coffee taste that adds to the overall flavor of the cupcake.

*Note: Unfortunately, this icing was very thin and I had to add a ton more confectioner’s sugar to make it stiff enough to pipe. I would recommend adding small amounts of the coffee until it’s a consistency you like.